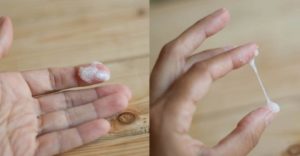 Many of my patients do not understand the significance of mid cycle cervical mucus which is the reason I am posting this blog in order to shed some light on the matter Fertile mucus starts getting produced about 6 days before ovulation as a result of a rise in the hormone estrogen. There are different types of mucus that are produced by the glands in the cervix. Many women are confused by which mucus is fertile and which isn't so I will try and make this easy to understand.. There is a type of discharge called G-Type mucus which is pasty and thick. This type is unable to be penetrated by sperm so it is not a fertile type of mucus. This is produced early in the cycle soon after the period. Then there is another type of mucus produced as estrogen levels rise more called L- Type mucus.It is a more liquid in texture. When ovulation is getting close the S-Type mucus is produced which has a more slippery and stretchy consistency and is also called egg-white mucus. The next type of mucus called P-Type mucus is the most fertile and is called P Type as it is rich in potassium. This mucus is not as stretchy but it gives a very slippery sensation to the vulva. The most fertile day in your cycle is the last day of this mucus being produced. This is the day before or the day of the egg being released out of the ovary or ovulation. If this is still daunting do not worry - my recommendation is to have sex every second day as soon as you feel the slipperiness on wiping. I have personally found that women who have followed this rule have had the most success in falling pregnant. Labels: • egg white cervical mucas • EWCM • fertile mucua • fertility acupuncture • IVF support